Occupational cancer is caused by significant exposure to carcinogens in the workplace, often over a prolonged period. The causes of cancer (carcinogens) are many and varied. They can be solid substances, liquids, mixtures, vapours, gases, dusts or even radiation. Without adequate control, you can be affected by breathing them in, absorbing them through the skin and accidental swallowing. There is usually a considerable period of time (often more than 10 years and up to 40 or 50 years) between these exposures and any ill-health symptoms developing.

HSE commissioned detailed research into the burden of occupational cancer in Great Britain caused by past exposures. Now published, this research highlights significant risks in construction. Below are some key points about these risks and why they are so important.

The research looked at the number of people diagnosed with occupational cancer (registrations) in 2004 and who died from occupational cancer in 2005. These are estimates based on past exposures up to 50 years ago. There have been many changes in the construction industry over this time to work methods and materials/substances. It estimated that: 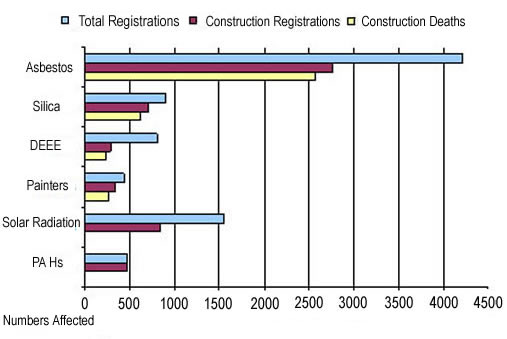 Work is ongoing to see how subsequent changes in the industry might impact on the potential future number of people suffering from occupational cancer. Organisations are also taking positive steps to tackle occupational disease.

Is this page useful?